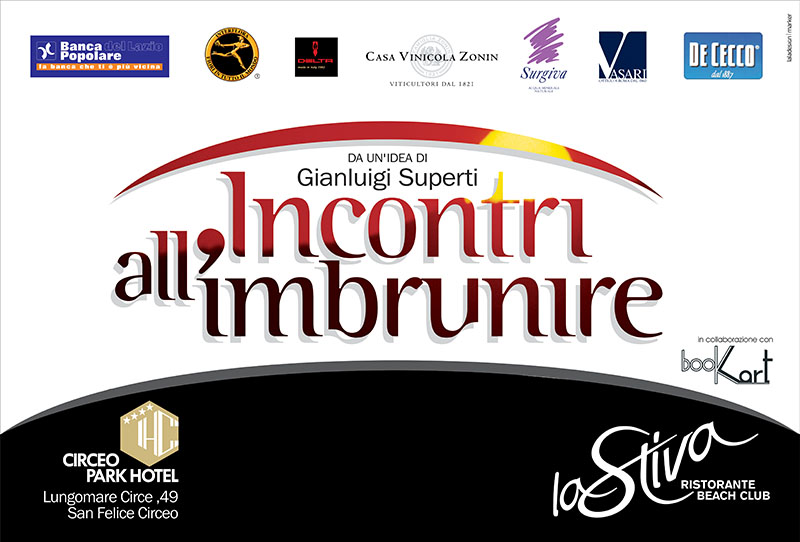 ” The book is a spare life, a port to which someone has to direct us , because they did not always come alone. ” (Nantas Salvalaggio , August 2002)
Even this year our MEETINGS AT SUNSET will give the spare lives hidden under the covers of the new 2013 books.
Telling the books will be leading names of contemporary literature , journalists and major sports, film , politics and music figures.
It’s never a simple round table but it’s a sparkling festival, engaging and exciting, because another of the mottos of the exhibition is the famous phrase of Vinicius De Moraes , ” A vida è arte do incontro.”
The 6 appointments shall be as tradition during the month of August at 19.00 when the sun begins to set and leaves room for dusk and deep thoughts.
The frame of the exhibition is the Mediterranean garden of Circeo Park Hotel where the words are magically suspended in the air, thanks to the involvement of a large and passionate audience and where a fine aperitif characterizes the final greetings of what is now considered the literate entertainment of Ulysses’Coast.

On the guest book have already put the signatures among others Magdi Allam, Giuseppe Ayala , Italo Cucci, Giancarlo De Cataldo, Luciano De Crescenzo, Giampiero Galeazzi, Giordano Bruno Guerri, Luca Goldoni, Pietro Mennea, Gianni Rivera, Nantas Salvalaggio, Mario Sconcerti, Enrico Vanzina, Stefano Zecchi.
Not only books, but also movies, sports and music.
That’s why during the meetings we also discuss of movies and songs and it may happen to hear them too.

Radio Rai has a window dedicated just to the meetings of Circeo in which Franco Califano, Giulio Casale, Ivan Lins, Amedeo Minghi and Tosca gave the thrill of live musical performance;
a spontaneous tribute of five major voices to our show.

NEXT MEETING AT SUNSET

This website uses cookies to improve your experience while you navigate through the website. Out of these, the cookies that are categorized as necessary are stored on your browser as they are essential for the working of basic functionalities of the website. We also use third-party cookies that help us analyze and understand how you use this website. These cookies will be stored in your browser only with your consent. You also have the option to opt-out of these cookies. But opting out of some of these cookies may affect your browsing experience.
Necessary Sempre abilitato
Necessary cookies are absolutely essential for the website to function properly. This category only includes cookies that ensures basic functionalities and security features of the website. These cookies do not store any personal information.
Non-necessary
Any cookies that may not be particularly necessary for the website to function and is used specifically to collect user personal data via analytics, ads, other embedded contents are termed as non-necessary cookies. It is mandatory to procure user consent prior to running these cookies on your website.
ACCETTA E SALVA